Home » Pregnancy » CAUSE OF DOWN SYNDROME

CAUSE OF DOWN SYNDROME

But, let’s start with the basics first and then go on to the more advanced understanding of the cause of Down Syndrome.

CONTENTS: 1… CAUSES and TYPES OF DOWN SYNDROME – The Extra Chromosome 21 —  2… It’s all the women’s fault, the sticky chromosome theory — 3… Father’s age plays a significant role in the cause of Down Syndrome — 4… Protein BubR1, when in insufficient amounts, can cause an increase in still births and birth defects, such as Down syndrome. 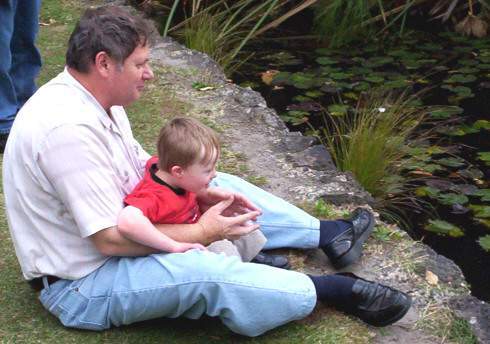 1… CAUSES and TYPES OF DOWN SYNDROME – The Extra Chromosome 21

At conception – at the coupling of egg and sperm – something goes wrong, resulting in the fertilised egg having three chromosome 21’s; aka trisomy 21 ( tri – meaning three). A normal baby only has two chromosome 21’s.

1b. MOZAIC Down Syndrome

Occassionally an aberration occurs, when the egg fertilises correctly, but as it divides again and again, an error in replication occurs and part of the baby has an extra chromosome 21 in the cells. When this later error occurs, the kid is said to have ” mozaic Down Syndrome ” – mozaic referring to the mixture of normal and Down Syndrome cells.

1d. Why was it called Down Syndrome and what do we know about the chromosome?

So, having covered the rudimentaries, lets now try and understand the cause of Down Syndrome a bit better.

More about the biological genetic cause of Down Syndrome: Dr. Antonarakis et al, year 2002, Chromosome 21 has been found to contain 184 genes. Nineteen more genes than previously thought.

Pevsner, year 2003, we still don’t know which genes or processes cause the neurological changes we see in Down Syndrome.

Roger Reeves et al., year 2004, states it is now clear that no single gene is responsible for the changes that Down Syndrome causes. It may be possible, from what we are learning from mice, to modify the genetic expression of the extra third chromosome in people with Down Syndrome, thereby effectively reducing or eliminating the damaging changes.

2… It’s all the women’s fault. The sticky chromosome theory.

Our obstetrician informed us that the cause of Down Syndrome was the increasing chromosomal abnormalities that occur with age: The chromosomes are lined up in pairs in the egg before the mother is even born. The older the mother gets, the more ‘sticky’ the chromosomes get. So that when the time for them to divide occurs, the more likely with age that they will divide unevenly, taking material from, or losing material to, the other chromosome in the pair.

3… Since that theory, research has since shown that the father’s age plays a significant role in the cause of Down Syndrome.

Gone are the days of the mother having to take all the guilt – if you’re a mother, I think you know what I’m talking about. Now the cause of Down Syndrome is seen in terms of the mother’s and father’s age.

When both mother and father are into their mid thirties, early forties, both are some how unwittingly linked to an increased risk of a Down Syndrome pregnancy.

The authors of this fabulous study are unable to clarify why the age factor is so important.

We can, however, surmise that there is something that goes wrong, that translates into Down Syndrome; that this error is more than likely common to both the female egg and to the male sperm. Something is changing in these as our bodies get older. One lot of scientists believe they may have the answer:

4… Dr. van Deursen et al, year 2005. The cause of Down Syndrome appears to be rather simple thing:

As you may know, as people grow older they also tend to develop genetic and chromosome errors, in their eggs if female and in their sperm if male. If you want to know more about this, you can check out our web page on Down Syndrome Risk Factors in Pregnancy and check out section 4 and the fertility notes provided there.

According to Dr. van Deursen, based on his and others research on ovarian BubR1 protein in mice, he concludes that this protein may be the cause behind age-related infertility, as well as a cause of some birth defects in babies. This is because we have the equivalent same gene producing said protein. The researchers appear to suspect that this protein, when in insufficient amounts, can cause an increase in still births and birth defects, such as Down syndrome.

Is this, the cause of Down Syndrome, finally answered?

May be, but there is much more research that is going to have to happen, to know for sure and to provide an effective remedy, at least for preventing Down Syndrome.

Just think, one day you may be able to take a tablet or have an injection, knowing that this will prevent the genetic error without forgoing or killing the kid. What a blessed day that will be. But, when that last person with Down Syndrome dies, our world will be less perfect.