Down syndrome (DS) raises a number of important questions to parents about their  children with Down Syndrome, to other care givers and specialists who are required to work with those with a Down syndrome diagnosis, to people in the greater community, such as grand parents, friends, distant family members, neighbours … and the list goes on … children with Down syndrome will normally interact in a large way with many people outside the nuclear family.

The 10 BIG Questions People Have About Down Syndrome:

These are the main questions that come to people when Down syndrome enters their field of focus, and yes, they are answered below briefly along with others, and we have focus pages about each of these topics questions in much greater detail.

What is Down syndrome? 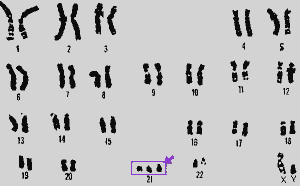 You can still get diagnosis Down syndrome, if the person has two and a bit, of chromosome 21’s present. Most people with DS have the 3 full chromosome 21’s.

There is a form of Down syndrome called mozaic Down syndrome. The definition of mosaic DS, is essentially the same as normal DS, except that the extra chromosome does not exists in all cells of the individual.

Mozaic Down syndrome appears to occur during the pregnancy as a result of a chromosomal error occurring in replication. So the later it occurs, the less of the individual is affected, and the DS effects then only show up in those body parts or organs so affected.

Can Down syndrome be caught off someone else?

No, Down syndrome is not contagious. It is a genetic/chromosomal difference – some may equate it to a birth defect, others to a birth enhancement.

What are the causes of Down syndrome?

To be precise, when we say such factors as mothers age causes DS, we are actually saying that the cause increases the risk of Down syndrome, not that there is a direct e.g. ” I’m 45, therefore my pregnancy must be Down syndrome”, it’s more like, ” I’m 45 and I have about a 5% chance, whereas before, the chance of me having a Down syndrome pregnancy was much, much lower”.

Finally, you may hear about Translocation Trisomy 21 this is the extra bit of chromosome 21 mentioned higher above in the section “What is Down syndrome?”. The person may have the extra bit of chromosome 21 and not display any sign of having Down syndrome themselves, but, when they have children, that extra may be passed on, and the child may obviously have Down syndrome. We don’t understand why the same genetic material can have apparently no effect on the parent, yet have such a dramatic effect on the child.

What are the symptoms of Down Syndrome?

However, the main common symptom of Down syndrome is developmental delay, which starts more obviously at birth for the most part with the forming brain.

Other symptoms of Down syndrome include Heart disease, leukemia and other Down syndrome health issues, speech and walking delays, early onset Alzheimer disease and dementia and decreased risk of certain cancers. Solid tumours are very rare in people with DS.

As well, they tend to be short in stature, somewhat overweight, and have unique looking eyes – they tend to have a specific set of physical characteristic appearance.

Another almost universal symptom of Down syndrome is hypotonia – low muscle tone – and it is important to understand that hypotonia also impacts on everything that children with Down syndrome do. Even just sitting requires the use of muscles, and if they are forced to keep using the same muscle group for long periods then this can then cause tiredness and concentration problems. Even potty training and toilet training can be affected significantly by hypotonia.

The hypotonia symptoms of Down syndrome are so enormous and impacting, that we have devoted a further three (total 4 ) focus pages to it alone: Hypotonia – Diagnosis, Causes and Treatment, Exercises to help overcome hypotonia Neonatal hypotonia – central and peripheral hypotonia

What are the Down syndrome effects? 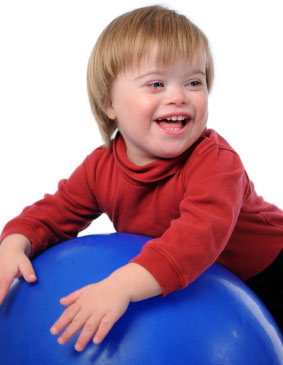 Yes, the diagnosis of Down syndrome has many pretty scary images. BUT these are images, perceptions, fantasies, sterotypes which border on being nothing less than racial prejudice and hysteria, born more in ignorance of reality than anything else.

Children and adults with Down syndrome tend to have more physical and health problems, such as with their eyes, hearing, hearts and digestive tracts, and tend to be much slower in learning new material.

The Down syndrome effects that are physical can normally all be cured through surgery and proper intervention.

The slower learning means that they can learn and develop cognitively, and most with Down syndrome can live and work independently from their parents as adults, with only minimal help from a care provider being required.

Adults and children with Down syndrome will form friendships, find clubs to be a part of, develop hobbies, and so on.

The Down syndrome effects can be quite obvious at the school level, where much human support is mostly required to help them to learn, but learn they do.

Maybe not rocket scientists yet, but they can certainly forge lives worth living when encouraged to, develop work and careers, and some go on to be high achievers, even though they may be slower in thinking and learning.

On a much darker note, because of these stereotypes of children with Down syndrome, they are more likely to be sexually abused, or abused in many other ways, and the perpetrators can and do get away with it, because the child with Down’s syndrome is unable to communicate, or, if the child does communicate, is more likely to be disbelieved. Training children with Down syndrome about sexual abuse and what to do about it, is therefore vital.

Picture/s of Down syndrome

What treatment for Down syndrome exists?

Basically as many treatments that exist for everyone in the greater community, also exist for those with Down syndrome. As the three chromosome 21’s normally reside in every cell of the body, the result is that just about any structure or organ may require repair or intervention. Our Down syndrome health page covers this amply.

The only things we cant treat completely at this time relate to the brain function – intelligence and so on – but we are getting there as well. Some are focusing on smart drugs for Down syndrome that specifically enhance cognitive performance in those with DS.

We also have treatment for Down syndrome focus pages on: The Doman Delacato Method andDolphin Therapy and Glyconutrients eg Ambrotose Mannatech and The Specific Carbohydrate Diet and Down Syndrome Vitamins – The Claims + Down syndrome vitamins – The cons and the use of DMSO.

Are there any cures for Down syndrome?

Cures for Down syndrome are very far off into the future, but being able to counteract the effects of the extra genes may be much closer than we think possible, especially with genetic enhancement of intelligence and learning in those with Down syndrome – Scientists have now identified the genes that cause the intellectual and learning impairments we see in Down syndrome. Some believe that we will have substantially cured the effects of DS within the next decade or so.

What are the Down syndrome facts?

Down syndrome is the most common chromosomal disorder in humans, with a frequency of 1 in 800 live births.

It is the most common cause of developmental delay and of intellectual delay.

Prior to heart surgery developing, babies with Down Syndrome rarely lived beyond one year of age.

Leukaemia – cancer of the blood – still takes a toll on a significant number of toddlers with DS, around the age of two years. One of Jacobs friends with Down syndrome came down with this, but with modern advances in treatment, leukaemia can often be beaten in most cases now.

So the Down syndrome life expectancy has been increasing dramatically over the last few years. With the increase in life expectancy, we may also see more ‘normal’ age-related health problems developing, such as cholesterol and hemorrhoids.

Hypotonia – low muscle tone – is almost universal amongst those with Down syndrome.

There are many, many Down syndrome facts.

What is the History About Down Syndrome?

Our earliest records related to Down syndrome history, come from an Indian tribe, who apparently attributed them a demi-god status, many 100’s of years ago.

Then people with Down syndrome were essentially lost from history, and didn’t really appear until quite late in history, till the 1800’s.

Then there was little advancement until late mid-1900’s, when people realized that children with Down syndrome  could thrive and prosper in the greater community. Prior to then, babies with Down syndrome were typically coerced from their parents and put into institutions for life.

Our son Jacob and Down syndrome

Not sure which Down syndrome link to click on?

You can find a summary of most of the pages on our  Down syndrome web site affirmative action page. Down Syndrome and Other Links

5 Responses to "Down Syndrome"