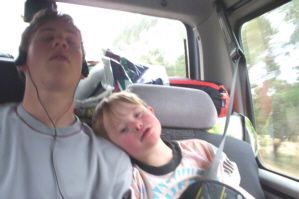 QUICK OVERVIEW of the Down Syndrome Pregnancy Symptoms professionals look for.

Amnio doesn’t increase the risk of natural abortion by much – but if a natural abortion occurs following it, guilt can happen even though the amnio may likely have played no role.  It’s the way we humans think and associate things to our own actions.
Ultrasound and blood tests are soft tests for a Down Syndrome Pregnancy – meaning they aren’t accurate enough to make firm judgements on.  Hence you can go to some websites and they give 100 or so ultrasound markers as Down Syndrome pregnancy symtpoms, but mostly that’s gobbedy gook – they are identifying certain health problems that any baby can have with or without Down Syndrome, though Down Syndrome babies maybe more likely to have such pregnancy markers.  The biggies for ultrasound are the lack of nasal bone and thickened kneck, which are more specific to chromosomal abnormalities, such as in a Down Syndrome pregnancy.
Blood tests are also not that accurate as a Down Syndrome pregnancy symptom, as they rely heavily on women having hormonal levels at specific times in the pregnancy, this can be clouded by individual differences, the inherent uncertainty as to when the pregnancy actually started and so on.
When we ad the Ultrasounds to the blood tests, that’s when the real higher risk babies are identified – but it’s still only a risk, not a certainty, of a Down Syndrome pregnancy.
Hence the reason why if it necessary to do so, to be absolutely sure, amnio is normally suggested.
Hope that clarifies things a bit further.

DOWN SYNDROME PREGNANCY CONTENTS THIS PAGE:

1… You are not alone in your search for Down Syndrome pregnancy symptoms.

2… Is there even one symptom of Down Syndrome Pregnancy that you can be sure of, one way or another?

As a mother, you wont be able to tell any difference.

We have five living kids and eight that died in utero. We can honestly say, there were no differences in the pregnancy symptoms of the one which had Down Syndrome.

What you have to do is rely on the medical experts to to pick up Down Syndrome pregnancy symptoms through their elaborate testing, which we explain next.

What screening tests are used and when, is determined by a number of factors, the most pertinent one being age of fetus – the trimester periods of pregnancy:

In the first trimester (trimester just means three months), you can expect to be sent for an ultrasound, as well as a blood test.

The blood test measures a set of biochemical markers for Down Syndrome that are often predictive of a Down syndrome pregnancy in first trimester.

Look for the nasal bone?

Although it is not well known about, there is another Down Syndrome ultrasound marker that may be worthwhile looking for.

In terms of the normal fetus population, the nasal bone can be detected via ultrasound 99.5% of the time.

So if it is missing from the ultrasound, it is almost certain the baby has a chromosomal abnormality.

It was also reported that the nasal bone was missing in 11 out of the 20 babies with trisomy 18 ( also known as Edward’s syndrome ) and in 2 out of 8 fetuses with Turner’s syndrome.

In all cases of triple X syndrome, trisomy 13, Klinefelter’s syndrome or triploid, the nasal bone was not apparent either.

When these results have been confirmed, it is hoped that the false detection rate will be halved, with a slight improvement in genuine detection as well.

More about the first trimester Down Syndrome Pregnancy screening tests

The following information on ultrasounds and blood test procedures for a Down Syndrome pregnancy may also be of some value:

Dr. MacRae, year 2000:
Ultrasound is to be seen as an additional tool in Down Syndrome pregnancy screening.

Ultrasound allows a greater detection rate earlier in the pregnancy of babies with Down Syndrome.

The new ultrasound technique is known as ” nuchal translucency “.

Assuming these ultrasound constraints are met, when the information is added to the blood test results, a more accurate risk of Down Syndrome can be obtained.

That is to detect around 90 percent of those babies with Down Syndrome, with only 1% to 2% of pregnant women needing to use the more invasive procedure of amniocentesis.

Dr. Kypros H. Nicolaides et al. 2005:
Essentially his findings concur with that of MacRae in relation to Down Syndrome pregnancy screening.

Ninety percent of babies with Down Syndrome can be detected within the first trimester of pregnancy using ultrasound and blood tests.

However, he also mentions that the screening has a false-positive rate of 5%. In other words, five out of every 100 babies that screen during the first trimester determines as having Down Syndrome, in fact do NOT have Down Syndrome.

b.. Down Syndrome Pregnancy Tests in the Second Trimester: What the experts look for and when.

Second trimester Down Syndrome screening of blood, blood sample must be taken between the 14 week 0 day to 20 week 6 days mark. Best time for blood sample is at the 16 week gestation age.

Often these blood tests for Down Syndrome are called the triple screen (also called the multiple marker test) and the alpha fetoprotein plus blood test, usually taken between 15 and 20 week mark of pregnancy.

These ultrasound symptoms of a Down Syndrome pregnancy are so soft, that their value appears to be more in worrying the expectant mother:

1. Brain cysts
2. Shorter thigh
3. Shorter upper-arm bones
4. Reduced femus to humerus ratio (upper arm to thigh bone ratio)
5. Splayed toes – enlarged gap between big toe and next toe – may be seen on a Down Syndrome pregnancy ultrasound.
6. Bright spots on the bowel, or a bright bowel (echogenic bowel pattern), or anything that suggests a gastrointestinal defect, such as duodenal atresia (double bubble), in the ultrasound.
7. Bright spots on the heart, or any sign of a heart defect in the ultrasound
8. High fluid levels in the kidneys, as suggested by pyelectasis, a dilation – enlargement – of the kidneys

Certainly, one of these very soft markers for Down Syndrome on their own, are most likely meaningless for diagnosing a Down Syndrome pregnancy, but if several of these ultrasound markers should occur together, then the prognosis of Down Syndrome becomes much more real.

a.. Chorionic villus sampling and determining a Down Syndrome pregnancy.

However, chorionic villus sampling can be performed from 9� weeks to 19 weeks gestation.

Chorionic villus sampling involves using ultrasound to guide the catheter – a thin tube, the worker inserts the catheter via the vagina and cervix to take a miniscule tissue sample from outside the developing sac (where the baby grows), that is, the sample is taken from the placenta.

Chorionic villus sampling should not be used in pregnancies where spotting or bleeding has occured, or where Rh sensitization from a previous pregnancy has taken place.

The Chorionic villus sampling technique can accurately determine Down Syndrome, as well as many other genetic disorders.

Test results from chorionic villus sampling are normally back within 1 to 2 weeks.

There is a tiny risk that the tissue sample taken will be that of the mothers, in which case the Chorionic villus sampling test result is useless.

b.. Amniocentesis and determining a Down Syndrome pregnancy.

Amniocentesis is usually performed from 14 weeks on in the pregnancy.

An amniocentesis is where a small amount of fluid is taken from around the developing baby.

The procedure of amniocentesis involves using an ultrasound machine to assist the technician insert a needle through the mother’s abdomen, then the wall of the uterus (womb) and then into the fluid surrounding the baby, leaving the baby and placenta alone.

Amniocentesis requires about 15mls (3 teaspoons) of fluid to be extracted.

Amniocentesis results may take up to a month to come back, typically two weeks, but are also very accurate for diagnosing Down Syndrome.

The risk of miscarriage from the amniocentesis test is around 1 in 200 tests performed.

Please note that the normal rate of miscarriage for a 14 to 18 week old pregnancy is 2 to 3%. So, amniocentesis adds 1/2% to that figure for that gestation period.

Percutaneous umbilical cord blood sampling is usually done when the fetus is 18 weeks or older.

Percutaneous umbilical blood sampling test uses a very thin needle, guided by ultrasound though the mother’s abdomen, to obtain a small amount of blood from the umbilical cord.

5… Email us if you need to with any question about a Down Syndrome pregnancy.

I think I have covered everything on Down Syndrome pregnancy, but if you have any questions, please contact me.