Home » Affirmative Action for people with Down Syndrome. » Hitlerism and disability today

Clearly there was no place for people with intellectual disability in the third Reich – no place for those with Down Syndrome. We have all seen the images, seen documentaries and read the books and articles. The horrors that awaited them when Hitlerism moved in are undeniable.

I will not attempt to go into the brutal history of this sad episode and the individual horror stories, rather I am concerned with the mentality and beliefs that were so fundamental to this disgrace and failure of our species in protecting our least vulnerable – and to highlight the continuance of this mentality into the present day, and how YOU can identify it easily.

The Hitlerism mentality can be summed in the single belief:

Kids with intellectual disability have no place in society. This wasn’t just confined to Hitler, it existed all over the world before and after Hitler and was by far the prevailing belief for several decades further. Hitler, however, did take the attitude to an all time low: 1939: Hitler decreed that disabled children, teens and adults – whether physically, intellectually, or mentally disabled – were to be exterminated and they were – 70,000 murdered. 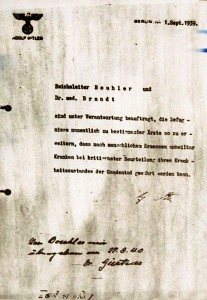 This image was chosen of the Aktion T4 document, because it shows that a piece of paper can be extremely dangerous – that includes the pages found in reports of your child or loved one, so make sure you read reports and object as necessary.

Things that may help you recognise creeping Hitlerism in professionals working with your kids: The kid cant learn to deal with that, so stop trying.

In all fairness, if a neurologist has determined that the wiring is wrong and just wont work, like happens in a minority with an inability to be toilet trained, and the tests confirm that, then until something changes, you are hitting your head against the wall and subjecting the child to excessive, impossible demands.

However, if the person was a doctor, psychiatrist or psychologist stating that, and no proper neurological/urological testing was performed, then you have an opinion without a valid foundation – creeping Hitlerism – The kid cant learn so stop trying.

So be attentative to the attitude of those working with your child.